So, you have heard cold showers are beneficial, you do a little research and then you stumbled across Wim Hof method.

So what do you do next?

Theres nothing else to do, other than pluck up the courage and get under the cold shower yourself.

However, what’s all the fuss about?

I decided to do a 30 day cold shower challenge and see if I felt any benefits from having them.

What are The Benefits Of Cold Showers?

Cold showers are beneficial in many ways, here are some below:

Reduced stress levels – Regularly taking cold showers forces a small amount of stress on your body, which leads to a process called hardening. Your nervous system gradually gets used to handling moderate levels of stress. Which in turn means the hardening process helps you to keep a cool head in a stressful situation. Higher level of alertness – Cold showers really wake your body up, which induces a high state of alertness. The cold also encourages you to take deeper breaths, decreasing the level of CO2 throughout the body, helping you focus. Cold showers keep you ready and alert throughout the day. Robust immune response – Scientific studies have found that cold showers increase the amount of white blood cells in your body. Its these blood cells that protect your body against diseases. This process is related to an increased metabolic rate, which stimulates the immune response. Increased willpower – It takes a strong mind to endure the cold for extended periods of time. By incorporating cold showers into your daily routine, you are strengthening your willpower. Weight loss – Research has shown that cold showers in addition to increasing metabolic rate directly, stimulate the generation of “brown fat”. This is a specific type of fat tissue that generates energy by burning calories.

Before we begin, I would like to take this opportunity and state that I have no medical background on this subject and I have no scientific data to back up what happened.

This is my opinion and I am merely sharing it with what happened over the 30 day period…So this is my “disclaimer” right here.

Wim Hof states in his online videos, to start off by doing 30 seconds under the cold shower. Then eventually increase to 2 minutes over a period of time.

For me, starting off doing 30 seconds wasn’t going to work for me in the sense that I wanted to get the most out of this challenge, and I didn’t want to build up a “fear” of the cold water, if that makes sense? Working up to 2 minutes was also going to take days and I didn’t want that.

I crudely measured the temperature of the water with my BBQ thermometer, which revealed the water I showered in was around 32ºc and the cold water which came out the sink tap measured 12ºc.

I couldn’t get the water any colder here, as this was the temperature of the water coming out the cold tap, even standing under the hose pipe outside would have made no difference, as the water all comes from the same source.

Firstly, I am not new to cold shower therapy as I did them a few years ago. This was purely down to the fact the gym I was training at had no hot water for over a week!

Which meant suck it up and get under the cold shower, or go home stinking and shower there.

Fast forward a couple of years, where I was listening to an episode of the Joe Rogan Experience and he had a guest on called Wim Hof.

He is known as the “Ice Man” and has a method that incorporates the use of cold showers as well as breathing techniques. He has proven that cold shower therapy does work and the cold can help you, with regards to your circulation, immunity and other things (more on this later).

After doing his method for a a few months, for some reason I stopped having them…

Moving on to 2021 and with me having the website and a Youtube channel, I thought it would be something that was worth documenting and seeing (on the channel).

Some of the things that are meant to be good for cold showers are as follows:

Things I Have Noticed

Once you get into the cold shower and stay there, obviously your heart beat elevates to a shock point. My resting heart rate is around 50 BPM, when I got under the cold shower it jumped to around 110 BPM.

After concentrating on my breathing for a few seconds my heart rate would eventually lower to around 80 BPM and would remain at this level for the duration of the cold shower.

After being under the cold shower for around 30 seconds, my skin would get used to the temperature of the water and it felt like a normal shower.

for the first week I would have a tingling sensation in my fingers and toes – this is something that is common when doing cold showers.

One thing you do have to be careful of is to not hyperventilate. As taking large and fast deep breaths through the mouth can resemble this.

A study confirmed that this method helps with regard to your immune system, as people were given a pathogen and the ones that used the Wim Hof method responded better to the pathogen than those that didn’t use the method.

This tells you that his method really does work!

Recently I did a “get ready with me video” on my YouTube channel. In this video I mentioned that I moisturise daily, as I do suffer from dry skin.

Normally when I get out the shower I would feel an itching around the stomach and waist area, but after taking a cold shower, I didn’t feel that.

I still had dry skin later in the day but one of the things that I have found out since is that cold showers are great for dry skin and eczema.

Another thing I noticed was that my hair felt thicker and had a different texture to it, not that it grew thicker but it felt completely different to how it normally did… interesting.

Would I Continue Cold Showers?

The short answer is yes. After 30 days of cold showers I feel more awake, as sometimes when I wake up in the morning I can feel a little jaded. Especially if I haven’t had the best nights sleep.

The one thing with a cold shower is that you will definitely feel as awake as you can after having one for the day ahead, that’s for sure.

I would highly recommend trying them if you struggle to get up in the morning, although you may find it a little difficult if this is the case.

I can’t actually think of any negatives regarding cold showers, other than if you already have a compromised immune system or heart condition, you should not do them or consult your doctor if its something you are interested in trying.

If you are going to try cold showers its worth starting off slow with 10-30 seconds and build up to longer periods once you are used to it. If you stick it out and can get over the initial shock, you will definitely feel the benefits of having cold showers.

Fri Oct 8 , 2021
Upper Body Kettlebell Workout… As you surely know by now, here at Sport CBDs, we love kettlebells and most of […] 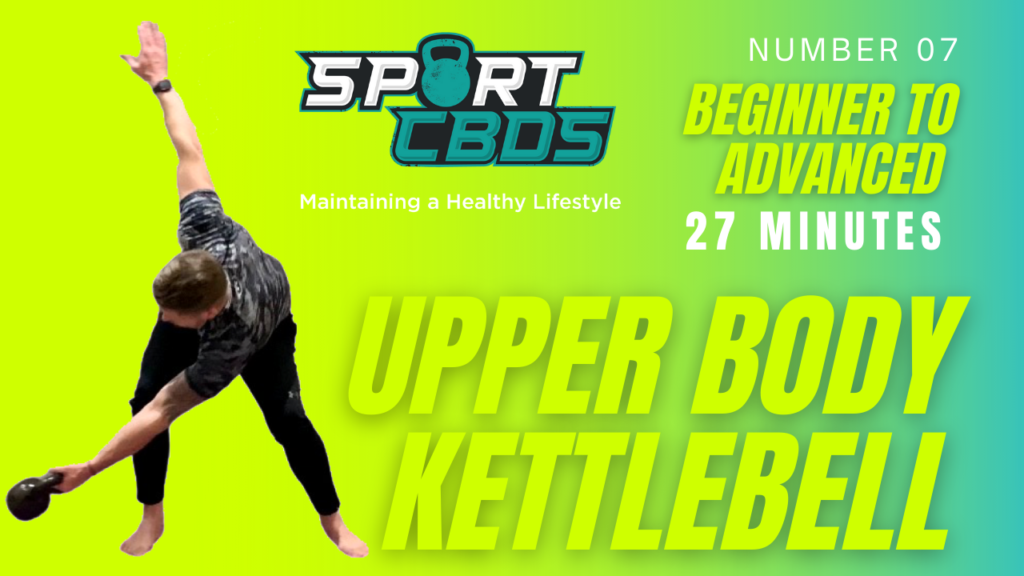